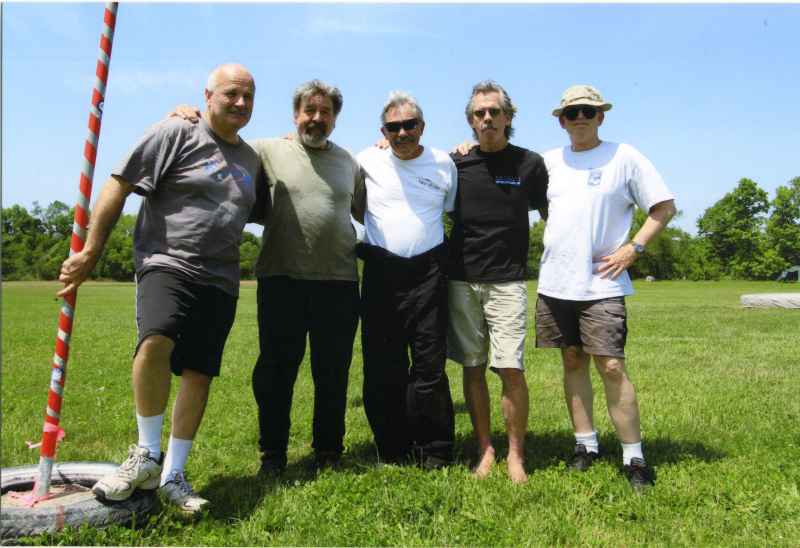 I know them all. The man on the right sits firmly in the category called 'always'. He was always there. He was there before me and I got there plenty early. I was six in 1970.

Second from the left was almost 'always'. The rest are relative new comers; they didn't show up on the drop zone prior to 1975. Ish.

The barefoot man was my first lover. That was a long time ago. For the sake of clarity, he does wear shoes of some sort from late November thru early April.

Green Shirt died shortly after this photograph was taken. I don't believe it was skydiving related. I'd be shocked, actually.

This morning I got a Facebook message from a man I'd really like to hit with a 2x4 most days and I'm sure the sentiment is mutual. It's not that we don't like each other, we do. It's that we live on opposite ends of the political spectrum and I smacked him upside the face for telling me he couldn't possibly wear a mask over his nose because his glasses fogged. He said I was being mean. Well, that's at least indicative of something.

He's not in this photo. That's OK, he's alive and kicking and that's what I care about. The day he dies there will be another very large hole in my heart.

It's the man all the way on the right who's managed to rip me open again. The drop zone was shut down for a couple of weeks (COVID and why are they open again?), so nobody knew he'd been found on the ground beside his car on November 24.

In the time of COVID, there are no funerals to speak of, at least not in my world. There are no memorials with hundreds of people drinking beer and telling stories, and there would be 54 years of stories in the skydiving world. He started jumping when he turned 16 and I didn't know until today that he was only 70. It's not that he looked terribly old, it's that he'd been around since the dawn of time and nearly all those people are dead now - except my dad, he's just alone.

Of everyone, I might have expected him to live forever.

I'm sorry, John. I'm so sorry. It's not fair, it's not right, and it hurts like hell that I won't be one of those people drinking beer in a crowded bar telling stories about you. Maybe more importantly, hearing stories about you; the complete and unabridged edition of the life and times of an old school skydiver who survived all of it.

I'm sorry you died alone. I hope you didn't know.