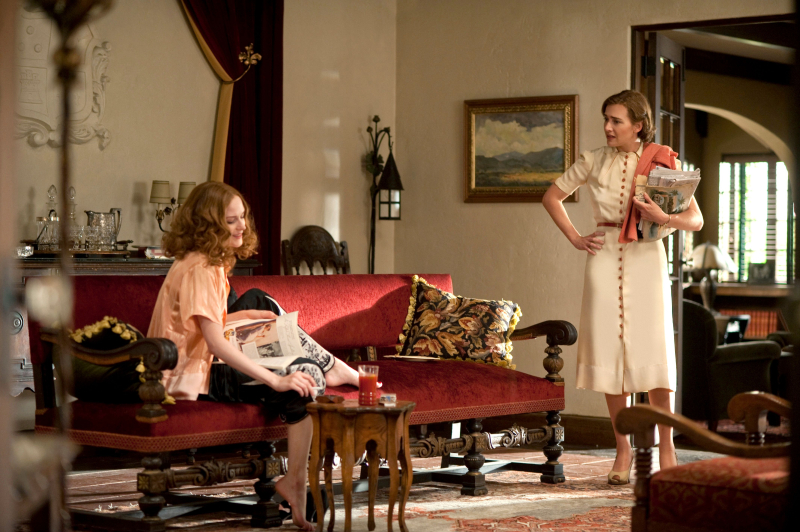 I suppose we all do it to some extent, but that doesn't lessen the personal impact of having done it twice.

The Mildred Pierce story is more a reflection on the pitfalls of raising an entitled child than a story about being stuck in a narcissistic relationship; although, it is that.

I've done this twice; however, before I get into the Mildred Pierce story it would be best to acknowledge that children are also accountable. We don't make them who they are in a vacuum and as young adults they are, in fact, far more accountable than their parents. For the most part. Believing this is not so, does not make it not so anymore than me believing that the conditions of my life are the fault of my children. We all choose.

Mildred Pierce, by James M. Cain, was published in 1941. The original film, staring Joan Crawford of all people, was released in 1945. The most recent version, a five part miniseries, was released in 2011.

I just now got around to watching it; I've been avoiding it for a couple of years and I'm not sure I could say why. I had no idea what the damn thing was about; it just kept popping up in my 'please watch this' feed. I think I clicked the start arrow out of desperation. When I'm knitting I generally like something on in the background. It keeps my mind from going haywire. Whatever's actually on the screen has three prerequisites.

A series or miniseries is best, so on it went.

I was irritated almost immediately by how easy it seemed for an unskilled single mother of two, before child support or alimony, to make enough money to support herself and her children in the middle of the depression. I think I wanted to smack a couple of people almost immediately but it was working for me. I persisted.

The upset that lives in my belly expanded exponentially with each episode. In many ways, I am Mildred Pierce. I see it in my relationships with men, my drive to provide my children with a standard of living that I somehow believe they deserve, and my willingness to let their fathers 'off the hook'. I'm not entirely delusional, but it's taken a long time to crawl out of that and I'm not out yet.

I can hear my mother's voice:

You made your bed, now lie in it.

That's not helpful, Mother, and it's also unreasonable and deadly. Unfortunately, it's also a belief that's been embedded in my marrow since I was at least four years old. That's a lot of shit to clean out.

I can hear my brother's voice:

You do know you've made some very poor choices, right?

Yes, Jack, I'm painfully aware of that and also, I'll tell you whatever you want to hear to keep you from going away. I don't want to die.

To be fair, he came back to that statement and apologized. That meant a lot, but the truth is it landed like a hammer because the belief was already there.

What did Mildred Pierce believe?

If you haven't read the book or seen the film, Mildred's downfall was her daughter. She didn't have to give Veda the things Veda believed were her right, and she didn't have to tolerate Veda's behavior. Mildred exploded periodically but it always ended in a mother groveling at the feet of a child who, without letup, inflicted a level of abuse that might be very difficult to understand.

But I do understand. Completely.

My relationship with my oldest daughter is almost something to be avoided. I can hold her at bay by removing all possible vulnerability on my part. When I stopped giving her what she wanted, when I stopped being The Bank of Mom, it got better. I noticed that when I did go out of my way to give her what she asked for, or what I believed she might want, it got uglier and uglier. And so I stopped. Rather abruptly. Being The Bank of Mom for Lucia, until the day she returned from her honeymoon at twenty-seven cost me half my chance at a safe retirement. Staying in Weston until Elizabeth graduated was the other half.

Both girls believe they are entitled to... just pick something; you'll probably be accurate.

While Lucia may have broken my heart, Elizabeth mets out punishment and rage at the smallest infraction. I hide from her, sometimes for days, in my office.

Today, I blew. Today I had a conversation with her father that didn't quite land. It's hard to hear and understand the words, 'I'm not doing this anymore', when your experience of a person is that they will.

I think about Mike. Sending Mike away at twenty broke us both, but I am not responsible for how Mike got where he is today. Mike made those choices; I did not make them for him. That doesn't mean I think he should lie in the bed he made. On the contrary, I recognize where he is and why he is and the compassion we have for each other is remarkable.

And therein snarls and twists the root of my fear. That I might break my child by holding her accountable has been more than I could bear, and so I did not. What I haven't taken into account is that of my three, she is by far the most competent, the most likely to thrive if tossed from the nest at twenty.

Fuck. I was married at twenty and a mother by twenty-two and I am astonished at the belief that she is too young to be held accountable. Yes, being tossed from my home at eighteen sent me so deep under water, I'm shocked I survived. It wasn't until six months ago that I looked at the circumstances. I left home at eighteen, seven months post rape. I was functional on the surface. Barely.

Nope. It's the other way around.

So I sit here in my office, dumping my guts onto virtual paper and waiting for my daughter's father to either take her from the house or smack her into submission. Or until I calm the hell down and fall right back into the same self-destructive pattern.

When I behave in a way that my children find unacceptable, they go right for the jugular.

Which translates to: stop it! you're hurting me! I don't like that! and drumroll....

You are a horrible human being.

That's just what I hear. Someday I'm going to ask them what, exactly, it is they think they're saying to me, and why.

So that's it. I've finally gotten around to writing a post that actually processes something. Or tells a truth, or reveals a vulnerability, or.

I'd like to say, it's not as bad as all that, and isn't. Except when it is. The only thing that's on me is the fact that I tolerate it.

****For the record, none of my children are sociopaths are narcissists, but Mildred Pierce is a horrible lesson****