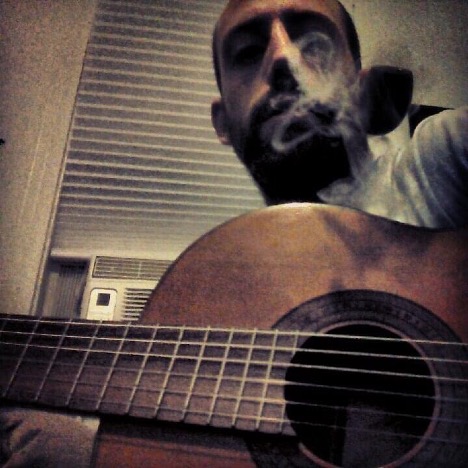 I have no idea how this photo ended up in my photo app on the Mac. Not on my phone, in the cloud. Maybe I downloaded it, but that doesn't put it in the app unless it came off my phone and why is this even relevant?

For reference, that's a tobacco pipe in his mouth and he managed to take that that photo himself. He referred to it as a selfie but for some reason it's not. Not really.

I think when we photograph ourselves we're making a deliberate statement. It might be a couple of people together, and they're trying to say: hey! this is us! right here and now!

I think many of those photographs fail to represent the human being(s). I think we see a momentary surface and that's OK. These are not self-portraits, they're self-moments.

I don't mind most selfies. I don't much care to take them, but periodically wish I had. There's a photograph of me on the docks in Falmouth. DK took it. I took the photos of the Tall Ship, mostly because I couldn't make out the name from where I was standing. I don't have a photograph of DK, and I don't have one of us. I wish I did. I took the somewhat blurry photograph of the white bench and chairs outside my hotel in Falmouth. I did that because it was starkly beautiful and I'd had time to quiet myself. In that photograph I can feel the presence of her, even though she'd gone home for the night. I can feel the presence of myself, in that moment.

A long time ago I stopped taking photographs in the places I'd most like to keep the images. This was a deliberate choice. When we are busy photographing moments and places, we aren't really in them. I decided I'd rather be in the time and place. I decided I'd rather be present to all of it. That's why there's no photo of DK. I was too busy being with her. I was too busy soaking up the reality of her; so many years between then and now and you put your feelers into the air trying to reach the delta you can't really see, because it's moved on down the river.

All things move on down the river, but if you aren't there, the best you can hope for is to hear the echos after the fact.

I lost my son fourteen years ago. He came back a little bit at a time. The first thing to come back was pain and it took a bunch of years before I could see anything else. There was anger all tangled up in the pain; that's the wall that goes up, ostensibly to keep more pain out. You know that doesn't work, right? We do it anyway.

He came back a little bit at a time.

This photograph is eight years old. It is starkly vulnerable. He might tell you it isn't. He also might tell the truth but I'm way past the need to force the truth out of a person. I do that, we do that because we need confirmation or validation of what we see and feel. I'm way past that, at least with him.

We are shattered beyond recognition by our first babies. Sometimes that window gets slammed shut pretty damn quick. If we're lucky, if we're willing enough to keep it open, we remain that way. The outer walls of the heart breached; the bits and chunks fall at our feet. He hit that wall head first, like a torpedo.

Eight years ago, I might have seen the photograph, but I wouldn't have seen that raw version of who he was standing in front of me. These days I see a lot more. I see and feel more than I'd ever hoped, but not quite that. Not yet. He's wrapped around muscle and bone, all the way to the center, exactly the way I found at 12:43 and a half, so very early in the morning.

I was twenty-two when he was born. I didn't stand a chance.