This is the bag that nearly drove me to day drinking as a way of life. This is what comes of not having any sort of pattern at all. Not even a guide. Just a bunch of nifty ideas about how a laptop sleeve should function, and one really cool design over at Purl Soho (the people who eventually taught me to knit a bottom up sweater).

If I hadn't been trying to destashify the not so lovely fabric I stuck myself with for the other bags, I might just have followed along with Molly. EXCEPT for the zipper part. I was, and still am convinced that most electronics need to be well secured when in transit. Velcro ain't gonna cut it.

is my friend and has always been my friend (1994). We were married briefly in a union that produced Elizabeth. In the ladies room at the reception, my mother overheard two people whispering... this is going to end very, very badly. They were correct, we were never meant to be married. It absolutely did not work for either of us, and it nearly broke him. It did not end badly. He is still my ICE, my person, the phone number to be used when the poop hits the fan. He is the father of my youngest daughter and we have successfully co-parented an astonishing young woman. He is also one of my favorite human beings ever. Many reasons, one of which is that Patrick John is a true giver. Those are rare as hen's teeth, right? Not giving to get, giving to give.

He is also firmly grounded in the esthetics of the world; a fine artist making his living as a graphic designer. He specializes in fonts, which will be almost meaningless to anyone outside the graphics world. His work is exceptional and I've watched him stay up until dawn to get a thing right. There is no brute force in his design work and there is no surrender. I would never give the man a brute forced bag. Anybody else, yep. Not Pat. He would be ridiculously gracious; focused on the vision and overlooking the flaw. You get this guy right and you can open him right up.

I painted a small (2x3?) cardboard box once. It was a deep, startling blue like the night sky with a sunflower painted on the lid. The inside was painted gold and then filled with Hatteras sand. He cried for a week. It was a small gesture right up until it wasn't.

So that's why the 'almost day drinking as a way of life'. This thing nearly killed me. I have NEVER understood the mechanics of recessed zippers, but this bag requires a recessed zipper with a fairly wide panel insert to function properly. I don't how many seams I ripped with that thing, and that's not like me. Generally I give it a shot or two and then pronounce it good enough.

I do hand quilt. There is that. I am nowhere near as precise as the quilters who call themselves quilters. I couldn't properly stitch in the ditch to save my life. On the other hand, when we're talking functionality, has quilting always been about art alone? Nope. I stitched every one of those diamonds to make the hexagons except two, which was enough to convince me I could hand piece it faster. In the end, the entire thing was hand pieced. The machine wasn't cutting it. Design matters, perfection is subjective.

I ironed two inch thick upholstery interface (lining, whatever) until it was melted down to a quarter inch flexible rectangle and then  quilted the top onto off-white cotton. I did the same with the back using a soft black shirt (I cut the sleeves off first, honest) but that didn't work. It collected too much lint.

Neoprene. Hot damn! It was on sale right after Christmas and I paid next to nothing for a quarter yard that was at least 57" wide. In the struggle, I used every last bit of it. It was the collar that gave me the most trouble. Hammering in grommets: YES, you do need to be on a cement floor and you do need to bring that hammer down hard.

So here's the rest: 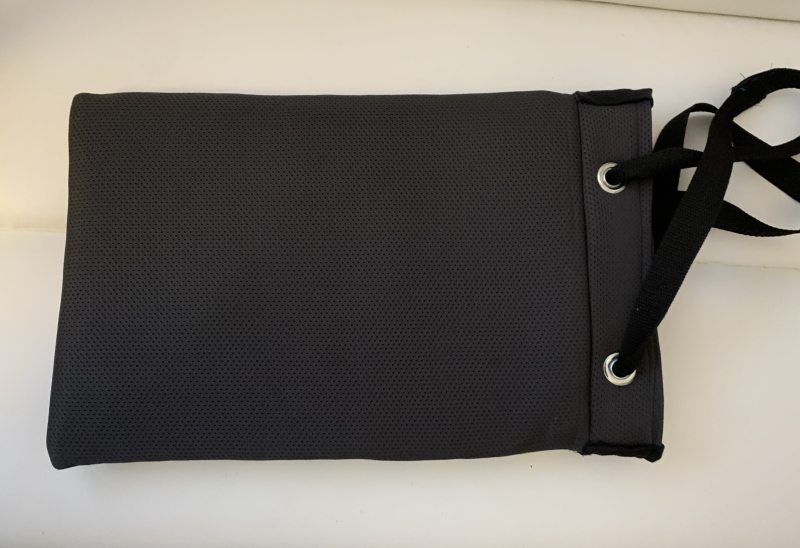 Do you see, on each side, there is a black canvas wrap around the collar? This is because this bag could not be turned inside out for finishing. There was no way to get the two 'right sides' on the neoprene collar. The collar is made up of three layers: two neoprene (front and back), heavy canvas for stability in the center. Add another layer of canvas and the machine told me where to get off. So those are hand stitched which is probably for the best. Please ignore the fact that I failed to properly trim the loose thread on the webbing. I fixed it before wrapping and sending out the door with Elizabeth. Promise. Sorta. 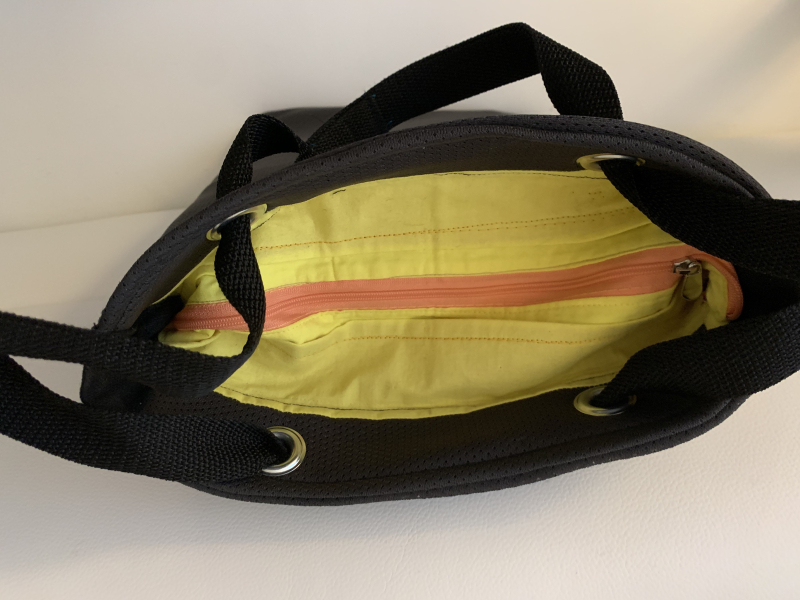 This is a very wide panel, a thing that was torn out more times than even the collar. There is a reason that panel is so wide. Two reasons, really. The bag does have some give and it's meant to. 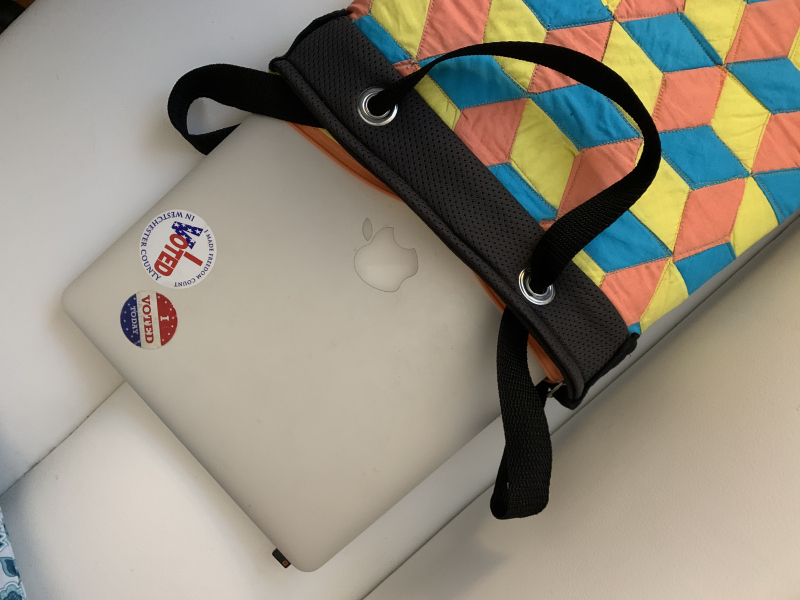 This is my 15" Macbook Pro. In 2016, when I bought it, it was the biggest portable they had. I needed some power, baby! It's still got more bang for the buck than any PC I've found in its price range today. I'll sweet talk it until the day it just cannot get back up.

It slides easily in and out but you do have to pull the straps out to the side and lift the zipper panel up. Most sleeves that I've seen have been very tight. I get that. Most sleeves are useless if you have to run that thing longer than battery life. So what the hell do you do with that ridiculously bulking power adapter? 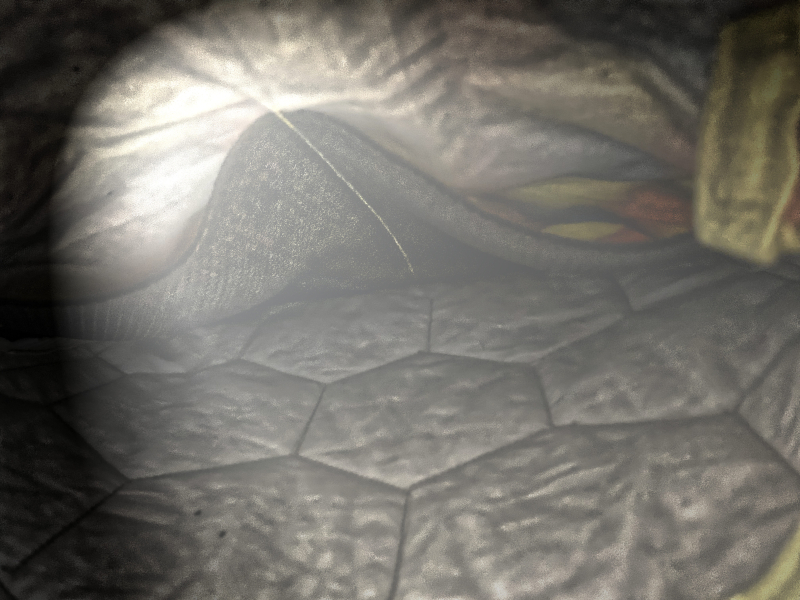 I know it's really hard to see. I had to take it into Affinity and run the clarity filter on it about four times which is what turned it silver. After that, I applied a spotlight to the neoprene pockets. The pocket is one piece of neoprene cut in half vertically with a single seam, back and forth twice (good ditch stitching on that one). The two pockets are anchored at the top of the bag from just below the collar down about three inches. The rest of it floats which allows expansion in both directions. With my ridiculous power cord and mouse, the laptop still fit. The bag was not particularly distorted.

This means I should have gone overboard with the pockets, right?!

I did. I stopped because the possible price of destroying the thing was too high. It walked out the door this morning, just 24 days after Christmas. He's a good sport.